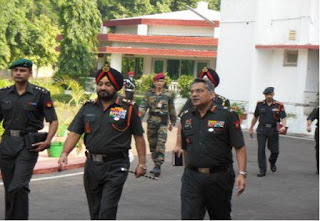 The Chief of the Army Staff, arrived in Lucknow on 25 September 12 on a two
day visit to Headquarters Central Command. Lt Gen Anil Chait, GOC-in-C, Central Command briefed the Army Chief on the state of operational preparedness of the Central Army.

The COAS made a courtesy call on the Chief Minister of Uttar Pradesh and thanked him for all the support extended by the Govt of Uttar Pradesh for the welfare of Ex-servicemen and the Army.
Posted by Core Sector Communique at 6:18 PM