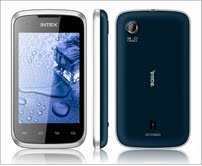 Intex Technologies, one of the fastest growing Mobile Phones, IT Accessories and electronic products company today forayed into Smartphones category in India with the launch of its first android phone- INTEX AQUA 4.0. Available at an unmatched price of INR 5490, the phone has been designed keeping in mind the needs of urban & semi-urban students and young professionals.

Diversifying into a new product category, Sanjay Kumar, GM- Mobile Business, Intex Technologies (India) Ltd. said, “We have been in the mobile business from the last five years and hence offering smartphones is a natural progression in growing our product portfolio in the country. While smartphones are mostly used by urban population, our market survey has established the huge demand in smaller cities and towns. We at Intex are geared up to offer best of the smartphones. AQUA 4.0 is one such offering which has a host of bundled applications and features that make it an ideal choice at a pocket-friendly price for youngsters.

“Spurred by the market demand, Intex is planning to launch 5 new models of smartphones in the next few months,” he added.

Named INTEX AQUA 4.0, this 2 point capacitive touch phone runs on 3G android. It bears a 3.5-inch display with a resolution of 480x320 pixels and runs on a 800 GHz processor, coupled with 512MB of ROM. The device comes with 131MB built-in storage, expandable up to 32GB via a microSD card. The device also has a rear-facing 3MP camera and a front-facing 0.3MP camera.

One of the most interesting features in the handset is that it is equipped with three sensors- Gravity, Light and Proximity sensors which allows the user to adjust brightness of the screen, detects and turns off the screen during calls etc. This in-turn controls the outflow of infrared rays and also saves battery at the same time.

Supporting both English and Hindi languages, the phone has an array of features such as FM radio, music player, sound recorder, pushmail, video capture, mobile tracker, calendar, notes, alarm, calculator, traffic monitor etc. Gmail, Flipkart, Facebook, India Rail, Google Maps, Nimbuzz, Skype and YouTube some of the pre-loaded applications in the phone which makes it the ultimate handy phone.
A 1400 mAh battery powers the device which gives you a talktime of upto 3 hours and a standby of upto 140 hours.

Available in black and white colors, the handset can be bought through 15,000 plus distributors and reseller outlets and is available at 70 INTEX SQUARES (exclusive retail stores) and several hypermarkets across the country.

Intex Technologies is a 16-year-old IT and Electronics products company, headquartered at New Delhi. It has a pan-India presence though its own network of 29 branches and 500+ service points.

Intex is ISO 9001:2008 certified and all India sales & service operations are managed on a world-class collaborative business solution- SAP.