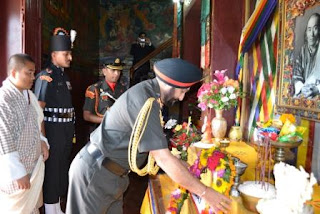 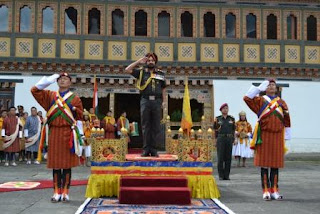 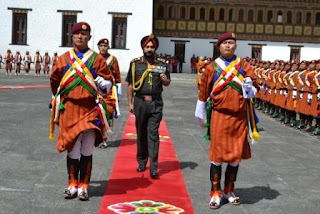 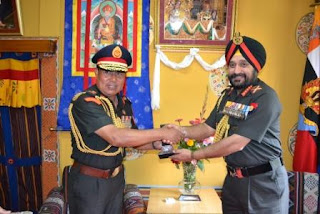 In his three days visit to Bhutan, General Bikram Singh, COAS participated in various events and interacted with several important dignitaries.
On 29 Aug 2012, the COAS, after laying a wreath at the National memorial called on the King of Bhutan, His Majesty Jigme Khesar Namgyel Wangchuk. The COAS was accorded a traditional welcome including a guard of honour before the interaction. The Chief thereafter called on the Prime Minister of Bhutan Shri Lyonchhen Jigmi Yoezer Thinley, which was followed by lunch at Dechhenchholing Palace. The discussions with the King and the PM were held in a very cordial and friendly atmosphere.
The COAS also visited Indian Military Training Team (IMTRAT) on 30 Aug 2012. The programme included a visit to Wangchuk Lo Dzong Military School (WLDMS) where he reviewed the training being imparted to students from Royal Bhutan Army.
The COAS returned to India on 30 Aug 2012.
Posted by Core Sector Communique at 7:38 AM