READY! RJ-Romain Jerome is once again taking you on a crazy round of video games with a limited series of 80 watches designed after the cult PAC-MAN™. In association with NAMCO BANDAI Games Inc. RJ-Romain Jerome is bringing the famous insatiable yellow character back to life with four series of 20 pieces paying tribute to this generational flagship Eighties icon. INSERT COIN


Created by Toru Iwatani, a game designer of NAMCO, and released by NAMCO LIMITED, the predecessor of NAMCO BANDAI Games Inc., in 1980 in Japan, PAC-MAN followed the huge success of SPACE INVADERS by touching an even larger audience and which for the first time featured women. The concept is universal and a legend is born – a hero who throws himself into an unbridled hunt for ghosts in the midst of coloured fruits, in a quest for “pac-dots” and “power pellets” spread all over a pixelated labyrinth. When the game came out in the United States, its popularity overtook that encountered in Japan, resulting in an unprecedented craze called “PAC-MAN FEVER”. With over 300,000 arcade game units sold all over the world, this is probably one of the most popular games of all time. SELECT PLAYER Manuel Emch, CEO of RJ-Romain Jerome, belongs to the PAC-MAN generation and is delighted to revive the game addiction of the generation of fans marked by this extraordinary game. 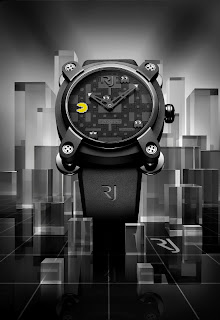 LET’S PLAY … Having inherited the highly distinctive case of the Moon Invader collection, a circle in a cambered 46 mm square, the PAC-MAN watches also feature steel fused with fragments of Apollo 11. The four ball-and-socket joints at the corners of the case are functional and designed like the legs of the lunar landing module in American lunar expeditions. Boasting a highly sophisticated construction, and mounted on axles anchored in the case, these ball-and-socket joints hold the lugs of the rubber straps and their mobility make the watch easily adaptable to all wrist sizes. On the back of the watch, a disc made of Moon SilverRJ – a low-oxidation silver fused with moon rocks – reproduces the surface of the Moon. Each of the three dial levels is engraved with a pixelated matrix. The lower two levels are beadblasted, while the upper level features straight-grained edges. The characters and fruits adorning the dial stem from meticulous craftsmanship. Machined piece by piece, applied by hand and gem-set, they are subsequently lacquered with different colours or with black superluminova “green emission”, thus recreating actual game sequences. POWER UP!


HIGH SCORE! In June 2005, the Guinness Book of Records awarded PAC-MAN as the “most successful coin-operated game machine”. Today, more than 30 years after it came out, this game is still renowned and loved all over the world.


Get caught up in the “PAC-MANIA” and come to discover the four versions of the ultimate geek chic timepiece exclusively at colette, in Paris, from September 3 to 8. The pixelated characters will be on show at all RJ-Romain Jerome points of sale from September 10. YOU’LL EAT IT UP!
Posted by Core Sector Communique at 7:01 PM