ARMY ORGANISES NATIONAL INTEGRATION TOUR
New Delhi : Bhadrapada 30, 1934
Friday, September 21, 2012
Indian Army has always been a great catalyst of national integration and has done stupendous work by bringing together people from the remotest part of the country to the main stream by organising various programmes. National Integration Tour (NIT) is one such cornerstone under which the Army organizes excursion for children living in far off places to move out of remote hinterland and visit different parts of the country. As part of one such NIT organised by Red Horn Division, 20 children from seven schools of Kokrajhar, Chirang and Bongaigaon of Assam, met Lt Gen Gyan Bhushan, GOC-in-C South Western Command on 21 Sep 12 at Jaipur. 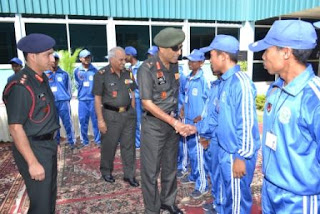 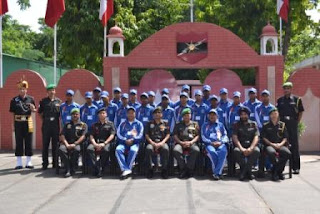 The aim of the tour is to bring to light the rapid scale of development on which the rest of the country has been traversing on and provide better understanding and mutual respect for different cultures and societies while showcasing their own thus integrating the people of Assam into the main stream of India. This tour was flagged off on 16 Sep 12 from Assam and after visiting Delhi reached Jaipur on 21 Sep 12. The children not only got the opportunity to get an insight into the historical significance of the city but also the emergence of modernization by visiting various upcoming city malls and shopping arcades.
The children will move to Agra and Mathura in next phase of their tour.
Posted by Core Sector Communique at 9:10 PM