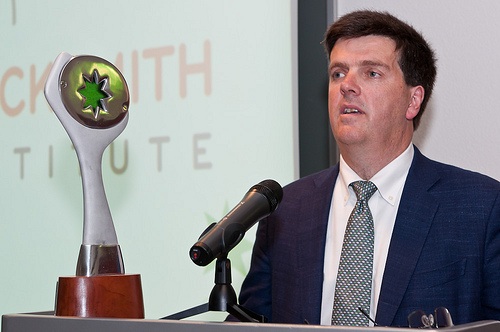 Blacksmith Institute has won the prestigious Green Star Award for excellence in preventing, preparing for and responding to environmental emergencies.
A joint initiative between the United Nations Environmental Program, the UN Office for the Coordination of Humanitarian Affairs and Green Cross International, the award was presented to Blacksmith President Richard Fuller at a ceremony in Bern, Switzerland on May 18, 2011.
"This award is important because it shines a light on the crucial work that is being done, often under difficult conditions, in environmental emergencies, when lives depend on fast and effective intervention," says Fuller. "It also increases awareness of global threats like toxic pollution, which often go underreported until a crisis happens."
Blacksmith was recognized for its urgent efforts following the Nigerian lead poisoning crisis, which killed over 400 children. Blacksmith collaborators TerraGraphics Environmental Engineering and Médecins Sans Frontières also received the Award for their part in the Nigerian cleanup. Other winners include a renowned academic working to make houses safer after the earthquakes in China and Haiti, and Linda Norgrove, who received a posthumous award for her work in Afghanistan.
Posted by Core Sector Communique at 7:09 AM